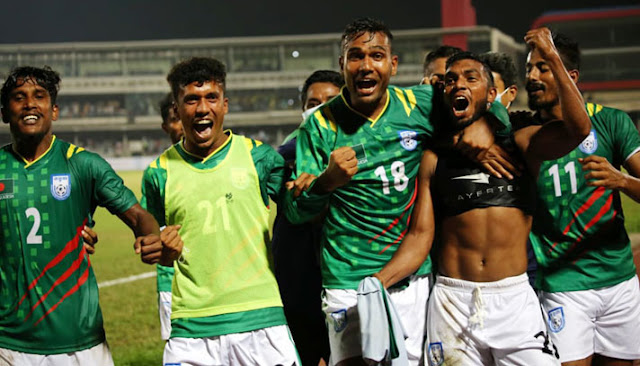 Jamal Bhuiyan is running with the ball, the sky is roaring with the audience. World football has not seen such a scene since the Corona epidemic began.

Star footballers like Lionel Messi, Cristiano Ronaldo or Neymar Jr. have played on the field. But they have been played in empty galleries, in artificial sounds.

How many games have been played, including the Champions League final or the Brazil-Argentina match. Everything except the audience. Bangladesh has done that. To put it more bluntly, the Bangladesh Football Federation (BFF).

Bangladesh is the first country to start an international match with spectators. Whether the matter is good or bad, that calculation will come later. But BFF has shown courage.

Football returned with the roar of the spectators. The footballers also paid the price. In the first of the two friendly matches, Jamal Bhuiyan played great football and defeated Nepal 2-0. The red-green representatives went ahead at the beginning of the match.

Jamie Day’s team did not see any more goals in the first half. But played great. At the beginning of the second half, the footballers were feeling numb. Jamal Bhuiyan got up and left.

However, in time, Bangladesh arranged the attack. After the first goal, we had to wait for 60 minutes for the second goal.

The goal was a sight to behold. Sufil got the ball from the cross just before the D-box of Nepal.

Going forward with lightning speed, he fooled the Nepalese defenders and wrapped the ball in a corner shot. Immediately the whole gallery roared.

Playing at home means the spectators cheering or roaring. But Corona made us forget it. The game has started all over the world, but without spectators.

The spectators were being deprived while organizing the game in a bio-protected environment. Bangladesh is an exception. Football has returned with the spectators.

About eight thousand spectators enjoyed Jamal’s game on the field today. It was played on this field about eight and a half months ago. Bangladesh lost that match against Burundi in Bangabandhu Gold Cup.

The last time Bangladesh lost in this field. After the Corona break, the red-green representatives returned with a victory. Although the footballers were worried about fitness before the match, nothing like that was seen in the match. The two teams will play at the same time on November 16 at this ground.

Bangladesh had lost twice before against Nepal. Now it’s time to take revenge. Jamals have gone one step further by winning the first match. Winning the second match will be sixteen full.