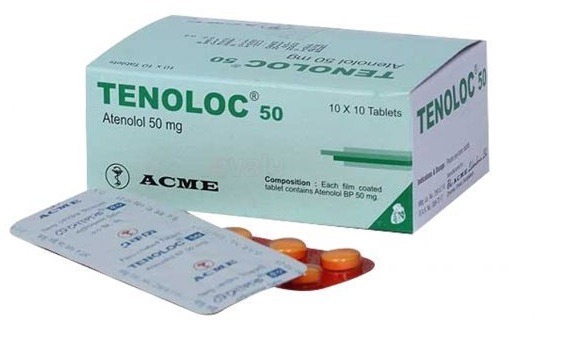 Tenoloc Tablet is used for the management of high blood pressure. It is a prescription medicine. This medicine works by relaxing the blood vessels and slowing down the heart rate in order to improve blood flow and to decrease the high blood pressure conditions. Tenoloc is also used for the long-term treatment of chest pain due to reduced blood flow to the heart (angina pectoris caused by coronary atherosclerosis). This medicine works by reducing the requirement of oxygen to the heart. It also helps in the reduction of heart rate and the ability of the heart muscle to contract (contractility) thereby making it effective in reducing the symptoms of chest pain. It is also used for the management of heart attack. This medicine works by increasing the requirement of oxygen to heart by increasing left ventricular fiber length and end diastolic pressure in patients who have heart failure. Tenoloc is also used for the management of increased or decreased heartbeat.

In the management of hypertension. It may be used alone or concomitantly with other antihypertensive agents, particularly with a thiazide-type diuretic.

For the long-term management of patients with angina pectoris.

In the management of hemodynamically stable patients with defnite or suspected acute myocardial infarction to reduce cardiovascular mortality.

The synthesis of atenolol resulted from attempts to produce a β-adrenoceptor antagonist that would competitively block β1 (cardiac) receptors but have no effect on β2-receptors. It is classified as a β1 selective (cardioselective) β-adrenergic receptor antagonist with no membranestability activity and no partial agonist activity. It is markedly the most hydrophilic of the currently available β- blockers and thus penetrates the lipid of cell membranes poorly 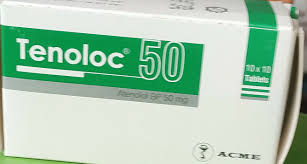 Hypertension: The initial dose of Atenolol is 50 mg given as one tablet a day either alone or added to diuretic therapy. The full effect of this dose will usually be seen within one to two weeks. If an optimal response is not achieved, the dosage should be increased to Atenolol 100 mg given as one tablet a day. Increasing the dosage beyond 100 mg a day is unlikely to produce any further benefit.

Twenty-four hour control with once daily dosing is achieved by giving doses larger than necessary to achieve an immediate maximum effect. The maximum early effect on exercise tolerance occurs with doses of 50 to 100 mg, but at these doses the effect at 24 hours is attenuated, averaging about 50% to 75% of that observed with once a day oral doses of 200 mg.

Acute Myocardial Infarction: n patients with definite or suspected acute myocardial infarction, treatment with Atenolol I.V. Injection should be initiated as soon as possible after the patient’s arrival in the hospital and after eligibility is established. Treatment should begin with the intravenous administration of 5 mg Atenolol over 5 minutes followed by another 5 mg intravenous injection 10 minutes later. In patients who tolerate the full intravenous dose (10 mg), Atenolol Tablets 50 mg should be initiated 10 minutes after the last intravenous dose followed by another 50 mg oral dose 12 hours later. Thereafter, Atenolol can be given orally either 100 mg once daily or 50 mg twice a day for a further 6-9 days or until discharge from the hospital. If bradycardia or hypotension requiring treatment or any other untoward effects occur, Atenolol should be discontinued.
Interaction
Catecholamine-depleting drugs (eg, reserpine) may have an additive effect when given with beta-blocking agents. Patients treated with Atenolol plus a catecholamine depletor should therefore be closely observed for evidence of hypotension and/or marked bradycardia which may produce vertigo, syncope, or postural hypotension.
Calcium channel blockers may also have an additive effect when given with Atenolol.
Disopyramide is a Type I antiarrhythmic drug with potent negative inotropic and chronotropic effects. Disopyramide has been associated with severe bradycardia, asystole and heart failure when administered with beta blockers.
Amiodarone is an antiarrhythmic agent with negative chronotropic properties that may be additive to those seen with beta blockers.
Beta blockers may exacerbate the rebound hypertension which can follow the withdrawal of clonidine. If the two drugs are coadministered, the beta blocker should be withdrawn several days before the gradual withdrawal of clonidine. If replacing clonidine by beta-blocker therapy, the introduction of beta blockers should be delayed for several days after clonidine administration has stopped.
Concomitant use of prostaglandin synthase inhibiting drugs, eg, indomethacin, may decrease the hypotensive effects of beta blockers.
While taking beta blockers, patients with a history of anaphylactic reaction to a variety of allergens may have a more severe reaction on repeated challenge, either accidental, diagnostic or therapeutic. Such patients may be unresponsive to the usual doses of epinephrine used to treat the allergic reaction.
Both digitalis glycosides and beta-blockers slow atrioventricular conduction and decrease heart rate. Concomitant use can increase the risk of bradycardia.
Contraindications
Atenolol is contraindicated in-
Sinus bradycardia, heart block greater than first degree, cardiogenic shock, and overt cardiac failure.
Those patients with a history of hypersensitivity to the atenolol or any of the drug product’s components.
Side Effects
In a series of investigations in the treatment of acute myocardial infarction, bradycardia and hypotension occurred more commonly, as expected for any beta blocker. In addition, a variety of adverse efects has been reported with other beta-adrenergic blocking agents, and may be considered potential adverse efects of Atenolol.
Hematologic: Agranulocytosis.
Allergic: Fever, combined with aching and sore throat, laryngospasm, and respiratory distress.
Central Nervous System: Reversible mental depression progressing to catatonia; an acute reversible syndrome characterized by disorientation of time and place; short term memory loss; emotional lability with slightly clouded sensorium; and, decreased performance on neuropsychometrics.
Gastrointestinal: Mesenteric arterial thrombosis, ischemic colitis.
Miscellaneous: There have been reports of skin rashes and/or dry eyes associated with the use of beta-adrenergic blocking drugs. Discontinuance of the drug should be considered if any such reaction is not otherwise explicable. Patients should be closely monitored following cessation of therapy.
Other: Erythematous rash
Pregnancy & Lactation
Pregnancy Category D. Caution should be exercised when Atenolol is administered to a nursing woman. Clinically significant bradycardia has been reported in breast-fed infants. Premature infants, or infants with impaired renal function, may be more likely to develop adverse effects.
Precautions & Warnings
General: Patients already on a beta blocker must be evaluated carefully before Atenolol is administered. Initial and subsequent Atenolol dosages can be adjusted downward depending on clinical observations including pulse and blood pressure. Atenolol may aggravate peripheral arterial circulatory disorders.
Impaired Renal Function: The drug should be used with caution in patients with impaired renal function.
Geriatric Use:
Hypertension and Angina Pectoris: Due to Coronary Atherosclerosis: Dose selection for an elderly patient should be cautious, usually starting at the low end of the dosing range, reflecting the greater frequency of decreased hepatic, renal, or cardiac function, and of concomitant disease or other drug therapy.
Acute Myocardial Infarction: Dose selection for an elderly patient should be cautious, usually starting at the low end of the dosing range, reflecting greater frequency of decreased hepatic, renal, or cardiac function, and of concomitant disease or other drug therapy. Evaluation of patients with hypertension or myocardial infarction should always include assessment of renal function.
Use in Special Populations
Pediatric use: Safety and effectiveness in pediatric patients have not been established.
Renal: Some renal impaired or elderly patients being treated for hypertension may require a lower starting dose of Atenolol: 25 mg given as one tablet a day.
Hemodialysis: Patients on hemodialysis should be given 25 mg or 50 mg after each dialysis; this should be done under hospital supervision as marked falls in blood pressure can occur.
Overdose Effects
Overdosage with Atenolol has been reported with patients surviving acute doses as high as 5 g. One death was reported in a man who may have taken as much as 10 g acutely.
The predominant symptoms reported following Atenolol overdose are lethargy, disorder of respiratory drive, wheezing, sinus pause and bradycardia. Additionally, common efects associated with overdosage of any beta-adrenergic blocking agent and which might also be expected in Atenolol overdose are congestive heart failure, hypotension, bronchospasm and/or hypoglycemia.
Treatment of overdose should be directed to the removal of any unabsorbed drug by induced emesis, gastric lavage, or administration of activated charcoal. Atenolol can be removed from the general circulation by hemodialysis. Based on the severity of symptoms, management may require intensive support care and facilities for applying cardiac and respiratory support.
Storage Conditions
Do not use later than the date of expiry. Keep all medicines out of the reach of children. To be dispensed only on the prescription of a registered physician.