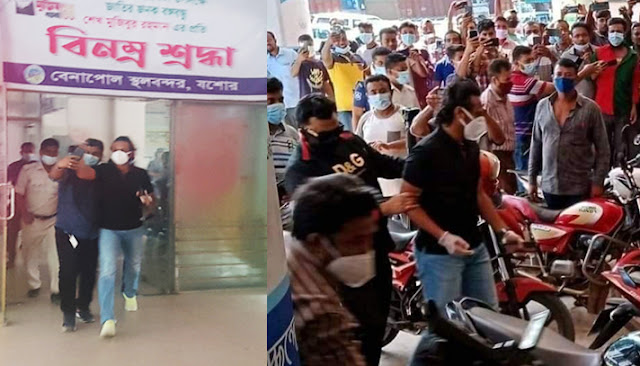 Fans could not contain their emotions when they saw their favorite player in front of their eyes. As soon as he saw the world’s best all-rounder Shakib Al Hasan, he ran to take pictures.

But without asking, Shakib got angry as soon as he picked up the phone in a selfie pose in front of his face. Not only did he get angry, he snatched the fan’s phone and threw it away, the biggest star of Bangladesh cricket.

The incident took place at Benapole Port Immigration in Jessore. After overcoming the ICC ban, Shakib left for India through Benapole port immigration on Thursday afternoon.

On his way to India, he snatched the phone from a Benapole immigration fan who wanted to take pictures with him.

Asked about the incident, the fan Mohammad Sector said, “I am a fan of Shakib Al Hasan. I couldn’t handle myself seeing him face to face.

So I went to take a picture with him. But he did not allow me to take pictures and snatched the phone from my hand. ‘

The employee of Shyamoli NR Bus told the fan that when the people present were upset by Shakib’s behavior, Shakib later expressed his sorrow to him by gesturing with his hand.

He said he would return to the country through Benapole on Friday after completing his work.

Meanwhile, Jamcon Khulna has added Shakib to the team from the players’ draft of Bangabandhu T20 Cup on Thursday.

If all goes well, this all-rounder will start on the 21st or 22nd of the third week of November and will enter the field with this tournament organized by the Bangladesh Cricket Board.