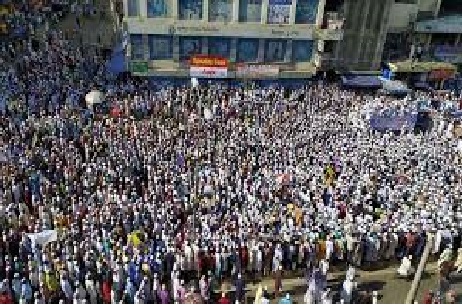 Many Islamic organizations have staged massive processions and rallies in Dhaka today after Friday prayers in protest of some recent remarks by President Emanuel Macron about Islam in France and cartoons of the Prophet Mohammad.
Thousands of people have taken part in these programs from the premises of Baitul Mukarram National Mosque to Paltan and Vijay Nagar areas.
The processions and rallies called for the removal of the French embassy from Dhaka and the boycott of French goods, as well as for the Bangladeshi government and the Muslim world to be more vocal against France.
One procession after another started immediately after the Friday prayers at Baitul Mukarram National Mosque. Some of the processionists had placards in their hands, banners in their hands, and cloths with slogans on their heads.
In one procession after another, people flocked to the huge area from Dainik Bangla Mor to Paltan to Vijay Nagar. Some organizations have set up temporary platforms at different ends of the road. The processionists were saying that insulting the Prophet would not be accepted in any way.
One of the protesters said, “Those who insulted the Prophet must apologize to the Muslims.”
Another said, “If necessary, we will be martyred. I am willing to give my last blood, but I will not disrespect the Prophet.”
Some have written slogans on behalf of the Prophet of Islam on placards brought to the processions under the banner of various Islamic organizations, while others have called for a boycott of French products on their banner placards.
They say their demand is the same – and that anyone who insults the Prophet or Islam must apologize.
A group of Islamist organizations in Bangladesh have been holding a series of programs in France for the past few days in protest of some recent statements of the French President on Islam and cartoons of the Prophet.
Earlier, an organization called the Islamic Movement had held a sit-in at the French embassy in Dhaka, demanding the severance of Bangladesh’s diplomatic relations with France.
Even today, the anti-French rhetoric in the platoon area calls on the Muslim countries to unite and speak out against France.
A speaker at the rally said, “Let all Muslim countries unite and judge France. Exclude all French products. We are willing to sacrifice our lives for the honor of the Prophet. ‘
Today’s rally at Paltan and samabesaguloke strict security measures taken by the police. However, in the end, no such unpleasant incident was reported.
However, several rallies have called on the Bangladesh government to play a more vocal role against France.
Speaking at a rally in Vijayanagar, Abu Taher, vice-president of the Islamic parties, told the government that if their demands were not met, they would launch more protests.
‘Remove the French embassy from Dhaka. Otherwise, no one will be able to stay in power on the side of France in the way the movement started. ‘
Meanwhile, similar protests and rallies have been reported in several places outside Dhaka after Friday prayers.
Source: BBC