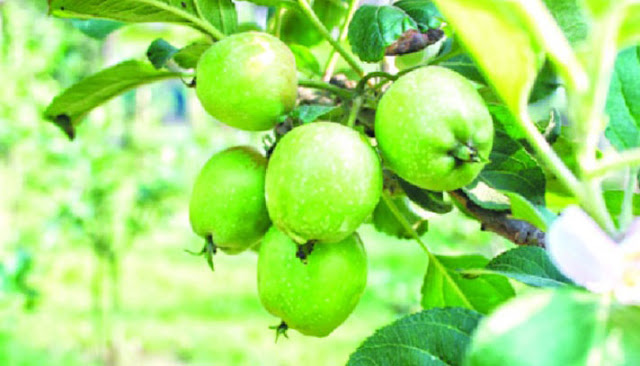 In the local garden, apples are hung in bunches of foreign fruits

Although foreign, apple is a delicious and nutritious fruit that has been known and loved by the people of this country for a long time.

Borhan Uddin of Sirajganj planted 35 experimental apple saplings three years ago. His garden now covers one and a half bighas of land due to success. Apples are hanging in bunches on the trees in the garden.

It tastes good too. It doesn’t take long for the word of mouth to spread about foreign orchards. Seeing this success of Borhan, apple cultivation has also become popular among the locals.

It is learned that Borhan planted 35 apple saplings on two and a half hundred acres of land abandoned near his house in Khaschar Jamalpur village of Barahar union in Ullapara of Sirajganj three years ago.

After being successful there, he is now growing the garden. He named the apple orchard Hassan & Brothers Apple Orchard.

Garden owner Robhan Uddin said the trees became quite big at the age of 11 months after planting. 30 trees are full of flowers. Gradually the tree bears fruit and grows larger. It doesn’t take long for the word of mouth to spread about foreign orchards.

People keep coming to see. People from far-flung districts are coming to know about this farming method. Many people are surprised to know that it is possible to cultivate this fruit in Bangladesh.

Borhan trained in apple cultivation at the Tissue Culture Lab in Himachal Pradesh, India. The saplings are planted to test whether the fruit bears fruit in the soil of the country. The trees grow, flowers come, bear fruit. The sweetness of that fruit is also good.

Later in 2019, he planted 200 seedlings of five varieties in 1.5 bighas of land. Borhan wants to make the garden bigger in the future. These varieties include Anna, Dobshek Golden, HRMM-99, Tofik Suite and Greenis Miss. He also collected these varieties of plants from the Horticulture Garden in Himachal Pradesh.

Borhan Uddin further said that he took the advice of some research teachers of Noni Agricultural University of Himachal Pradesh to make an apple orchard at home. He also gained experience by interacting online with researchers from the Horticulture Division in the Netherlands, England, Canada, USA and Jammu and Kashmir, India.

The apples mature in mid-June, with flowers blooming in late February and collecting apples from the trees. The trees in the middle stage of his house are now 10 to 12 feet high.

In June-July last year, he picked 30 to 40 apples for the first time. Borhan is hopeful that when the tree is full, he will be able to pick one to one and a half maunds of apples from each tree.

Earlier, many people in Sylhet, Comilla, Chittagong and Dhaka planted apple trees on the roof or land of their houses as a hobby. Borhan knows that he has also got a little bit of fruit. However, he claimed that no one had done the garden before him.

Ullapara Upazila Agriculture Officer Subarna Yasmin Sumi said the initiative taken by Borhan Uddin to cultivate apples at his home and on land was significant.

The Department of Agriculture has welcomed his initiative. Assistant Upazila Agriculture Officer Hiran Ali has been given the responsibility of looking after and advising Borhan Uddin’s apple orchard round the clock.

China isn’t permitting the WHO examination group to enter