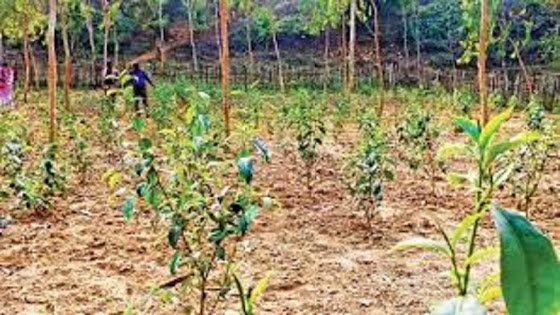 If you hear the word tea garden, most people will look for the Sylhet area in the northeast on the map. The image of a huge tea garden playing with green waves may come to mind. Those who are more interested in tea cultivation in Bangladesh can also think of Panchagarh in the northern district of the country. But it is a little difficult to imagine that tea is being planted in Gazipur of Bhawal, which is rich in hills and high lands.

In this area, which is known as the capital of jackfruit, it is common to see non-fruit bearing plants, but ‘tea cultivation’ was on the list of crops that have not been cultivated for a long time. This time a professor named Lutfar Rahman has started the process of bringing that impossible task within his reach. He has started tea cultivation on 3 hectares of unused land of his ancestral home in Kapasia, Gazipur. He hopes that through this impossible task, he has created possibilities by cultivating tea in Gazipur.

Although his home was Kapasia in Gazipur, Lutfar Rahman grew up in Sylhet. After graduating from MC College, Sylhet, Lutfar Rahman, who has a post-graduate degree from IBA (4th batch) of Dhaka University, was in charge of managing various tea gardens in Sylhet for a long time (1973-2007) in pursuit of a livelihood. He is currently the Registrar of the International University of Business Agriculture and Technology (IUBAT) in Dhaka.

The professor made a plan to cultivate tea based on his long acquaintance with tea. He chose the abandoned places of ancestral property of Chinaduli village of Kapasia in Gazipur.

According to him, the only tea plant among thousands of plants is an exception. Because its feature is that it will give you something. At least the tea tree does not cheat with anyone. Since Gazipur is a flood-free area, rich in highland lands, he allotted about 3 hectares of land around his house, cleared the forest and planted 10,000 saplings from Sylhet in 2019. This year, he planted tea trees on several other plots of land next to his house in Shitalakshya Char, as the trees he planted soon grew. He hopes to be able to go into production from this garden in a few years.

He said, in the past, CTC (Orthodox) national tea was cultivated in our country. Such tea cultivation has decreased day by day. At present this type of tea is produced only in neighboring India’s Darjeeling. Orthodox, that is, ancient tea, he wants to produce from Gazipur. That is his goal. At present tea cultivation is being expanded all over the country. Tea is being cultivated in different areas of Mymensingh near Gazipur. As such, there is a possibility of tea cultivation in Gazipur. According to him, where water is not stagnant, the soil has a high water holding capacity, there are irrigation systems where tea can be grown. Even on flat ground. He demanded to play a more effective role in the expansion of this important financial crop of the present time.

In this regard, the director of the Bangladesh Tea Research Institute. Mohammad Ali said that as tea is one of the most lucrative crops in the country, extensive initiatives have been taken to expand the cultivation. Besides flat lands in many parts of the country, tea is also being cultivated in Mymensingh near Gazipur. However, the feasibility of Gazipur has not been verified yet. Maybe it can be said on examination.

He added that not only tea cultivation but also processing is important. He also has to pay attention to the issue.