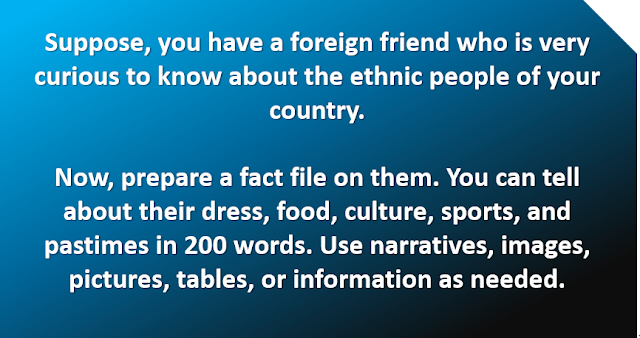 Suppose, you have a foreign friend who is very curious to know about the ethnic people of your country. Now, prepare a fact file on them. You can tell about their dress, food, culture, sports, and pastimes in 200 words. Use narratives, images, pictures, tables, or information as needed.

Ethnic group means one kind of tribe or community of people. They are different from us. Their religion is different from ours. They are a very important part of the culture of our country. They have different cultures and traditions.

Their clothes, jewelry, cooking, and eating habit are different from ours. Several ethnic groups live in Bangladesh. Among the ethnic people, the most well-known are the Chakma, the Marma, the Tipperary, the Hajang, the Gator, the Manipuri, and the Santal.

The majority of those people live in the Chittagong Hill Tracts. Some of them live in some regions of Mymensingh, Rajshahi, Bhola, and Sylhet.

By religion, they are Hindus, Christians, or Buddhists. They speak their own mother tongue. Ethnic People of Bangladesh have some common characteristics, they have their own lifestyles.

They build their houses on bamboo or wooden platforms. Rice is their staple food. Men wear lungi and women wear this or sarongs and angles.

Women weave their own clothes generally. Hunting and fishing are their favorite pastimes. They are fond of songs, music, dances, theatre, and fairs.

Traditional musical instruments used are bugles made from buffalo horns, drums bamboo flutes. Wrestling is a popular sport for them. Ethnic people play an important role in our culture and tradition.